Recently, the Hog Roast Chalford team were hired by Gemma, a local client, who was getting married. She hired the team cater at the reception and the night do buffet to her 100 guests. Gemma selected the Hog Roast Chalford team’s Menu Three as it offered a fantastic variety of different meats and flavours. The team began by serving drinks at the reception alongside a selection of canapes including Peking duck wraps flavoured with honey, mustard and ginger, grilled haloumi and caramelised onion skewers, smoked salmon on fresh brown bread, fillets of beef with salsa verde encroute and miniature quiches with a variety of fillings. The main course was served as a buffet with a choice of spit roasted, rosemary flavoured lamb, cooked to perfection in the Hogmaster machine, served with a mustard and dill sauce, or whole spit roasted turkey served with fresh cranberries and sage and onion stuffing. 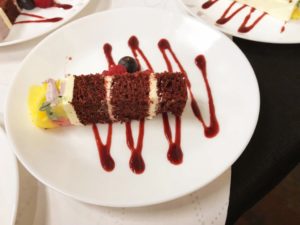 The meats were served alongside a selection of sauces and crusty bread. The team also served seasonal vegetables and roasted new potatoes in rosemary and garlic. The Hog Roast Chalford team also served a vegetarian option of lightly grilled haloumi and vegetable skewers with pitta breads and a Tzatziki dip. The buffet was followed with dessert dishes of profiteroles smothered in chocolate sauce and individual lemon tarts garnished with fresh raspberries and a fresh fruit coulis, both of which were served with cream. The Hog Roast Chalford team also provided plates dressed with ripe berries, a coulis of summer fruits and fresh cream for the slicing of the wedding cake.

The Hog Roast Chalford team provided all of their own equipment including crockery, cutlery and napkins for Gemma’s guests. The team arrived several hours before the serve time so that all of the food was ready on time. All of the dishes were prepared and cooked on site fresh and helped to set up the table arrangements as well as the wine bottles and guests lists. All of the meats were carved professionally by the team’s Head Chef who ensured that the buffet was presented beautifully.