This week, the team at Hog Roast Pershore were contacted by Tracey, a mother of a teenage boy who was soon about to celebrate his fifteenth birthday. For his celebration this year, Tracey was going to surprise him and his friends by booking for them to take part in an Escape Room scenario. She had everything arranged, but realised that her son and his friends would need feeding afterwards, and she was reluctant to simply take them for a takeaway, so she decided to hire a special team with a special type of cuisine. 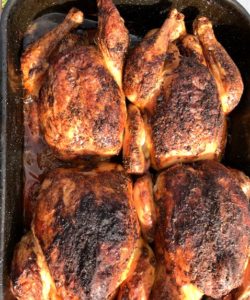 We spoke with Tracey about the particulars of her event, such as the time, date, location and choice of menu. The Escape Room facility did not offer food as part of their service, but they did have a small function room for birthday parties, where we would be able to cook. Tracey opted for the Southern Slow Roast Menu as it includes more than one choice of meat, however as the number of guests was only six people, including herself, she asked if we could provide only two options for meat, rather than three. She also asked for desserts.

On the day of the event, the team from Hog Roast Pershore arrived at the venue well before Tracey, the birthday boy and his friends had arrived. We always arrive nice and early to any event we are catering for, as we need to allow plenty of time for our slow cooking process, our key to achieving the tastiest, freshest cuisine around. On the menu today were the BBQ Pork Butt and the Cajun Spiced Whole Roast Chickens, complete with Cajun Spiced Sweet Potato Wedges, Corn Cobbettes and a Green Leaf Salad. The food was well enjoyed by our guests, who turned up later in the day, and came to eat after they’d broken out of the first room.

After desserts – light and fluffy individual cheesecakes – it was time for the boys to try their hand at a second escape room before heading back home for a night of movies and fun. Meanwhile for the team at Hog Roast Pershore, it was time to tidy away their mess discreetly and leave their guests to enjoy the rest of their day. Tracey thanked us for a job well done.