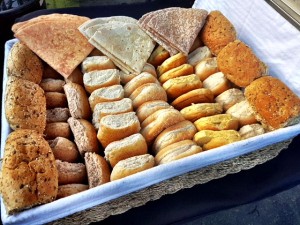 A local riding school decided to give their budding show-jumpers a treat for all their hard work and a bit of extra inspiration by inviting all of their students to a party at the riding centre to watch the pros in action at the Badminton Horse Trials! With their canteen becoming the screening room for the day, Richard and Sarah who run the riding school based not far from Badminton, decided against doing the catering themselves, as they wanted to enjoy the day and not miss out on any of the action. After being recommended by some fellow horse-enthusiasts who had hired us in the past, they called upon the Hog Roast Badminton team to help them out! They chose us because they knew from what they had been told, that not only can we cook at any venue, we can match our menus to the theme of the event and be as formal or informal as required. A classy event like the Badminton Horse Trials obviously required one of Hog Roast Badminton’s classy menus to go with it! Richard and Sarah decided not to go for our traditional Hog Roast and instead opted for our superb sirloin of beef, which is still cooked using the same slow roasting method and served pink, with all the trimmings.

As the excited equestrians gathered around the big screen, we prepared their upmarket Sunday lunch, timing everything to coincide with the finale of the competition. There were lots of edge of the seat moments and gasps of awe as they watched the professional riders in action and a nail biting climax which saw British hopeful Oliver Townend lose out on first place to New Zealander Jonelle Price, who jumped her way to victory on her majestic mare, Classic Moet! Luckily Hog Roast Badminton were on hand to console the riders who were disappointed about their home-grown hero losing out, with our own exciting culinary finale to the Trials! As the group savoured our blushing beef, horseradish and homemade red wine gravy, they soon got over Townend’s defeat and instead, raised a glass to the first female winner in 11 years!